Did you know that on the Ashuapmushuan river banks, there are giant footprint incrusted in the stone for centuries? These footprints supposedly belonged to a giant bear, guardian of the famous Chute à l’Ours fall. Here’s its legend, bringing us back to the French colonization period in Quebec...

On the fur trade route...

We have to go back to the days of great explorers, such as Jacques Cartier, way before the Site touristique Chute à l’Ours was created. At this time, the Ashuapmushuan river and its neighboring rivers formed a large network of natural highways from Tadoussac to the Hudson Bay. They were used for expeditions on the fur trade routes and, eventually, for timber drive.

One day, a group of explorers, guided by the famously-known Louis Joliette, set out in search of the northern seas to trade with the First Nations people living on the Nouvelle-France territory. 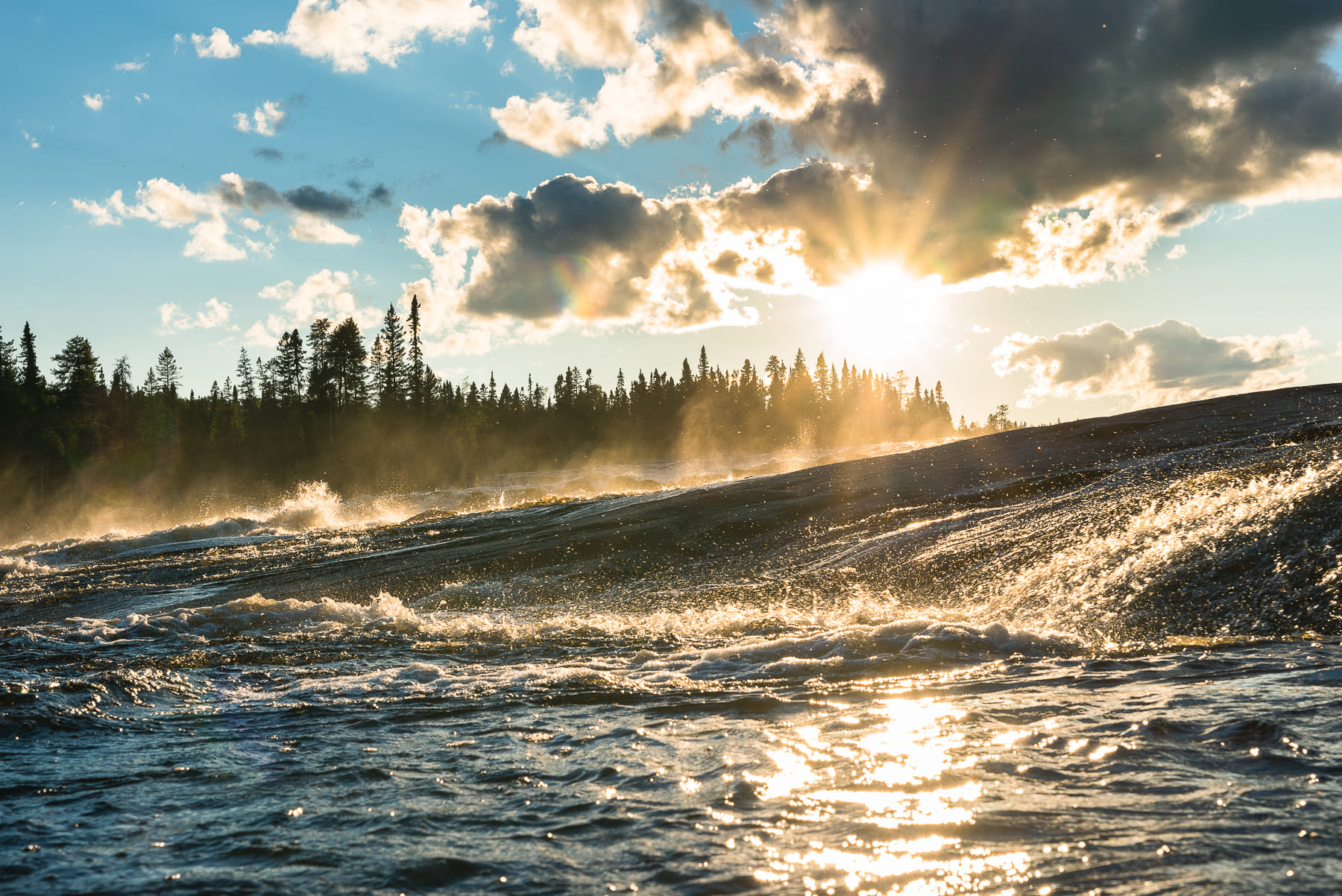 On the road to the James Bay, they took a break at the Chute à l’Ours, on the Ashuapmushuan river, to trade with a few locals. As they settled in for the night, they thought they were very lucky to admire the very magnificent spectacle offered by the landscape of the great falls and the dense boreal forest. It was also the perfect season to fish ouananiche (landlocked salmon), a fresh water salmon that goes up and down the streams every year from the Pekuakami (lake Saint-Jean). Starving, they even argued a little to be able to occupy the best rock for fishing and challenged each other to know who would bring the most fish out of the water! Then, with their bellies full, they fell asleep to the soothing sound of the fall.

Suddenly, in the middle of the night, an aggressive, hard-hitting growl woke up the whole troop! The group immediately started looking where the sound was coming from. Joliette then saw, under the bluish gleams of the morning, a GI-GAN-TIC silhouette, shaped as a wild monster, slowly advancing and growling. A legendary creature, entirely covered with black hair such as a giant bear.

At this very moment, Joliette remembered the warnings of the locals they met earlier, who had warned him against the “guardian of the fall”, which was living at the mouth of the Ashuapmushuan river. Fearing for the life of his companions, Joliette grabbed is gun and, without thinking, aimed at the monster and fired. The bear was so surprised, it leaned firmly on its back legs and jumped so strongly that the ground shook. The group was stunned by the huge leap that propelled the creature so high, it crossed the river in one bounce.

When he came back to his senses, Joliette looked down and saw giant footprints, impregnated in the stones, carved by the spectacular leap of the monster.

Where is the giant bear now?

Since that day, we have never heard from this gigantic bear again. Some say they saw him, claiming that he is still around, while others believe that he keeps the peace of the forest, being discreet to never relive such an adventure ...

Discover the theatrical adaptation of the legend, produced by the Zanimés theater troop as part of the La Petite Séduction show, filmed in Normandin in 2009.